Welcome in our brewery of Sainte-Mère-Eglise

Known as one of the first towns in France to be liberated on 6 June 1944 during the Battle of Normandy, Sainte Mère Eglise is today an authentic village in Normandy where life is good.

It is in this context, on a background of stories of the landing and parachutages, that we created our Brewery and the first artisanal beer of Sainte-Mère-Eglise.

Formerly a tour bus driver, I had the opportunity to travel around Europe and during breaks to taste the local beers of the visited countries.

Following a professional reconversion, we left with my wife Laurence, in the world of camping during 12 years.

It had been a long time since the desire to brew crossed my mind, it became a reality in 2014 when we created our craft brewery in Sainte Mère Eglise.

In order to train myself in the complex techniques of brewing and process control, I trained at the University of La Rochelle where I obtained my brewer’s DU. 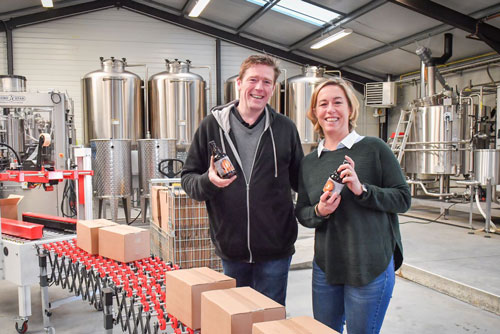 Alcohol abuse is dangerous for your health, consume in moderation. Pregnant women are strongly advised not to drink alcohol.